Posted by truedrivingdale on May 31, 2011
Posted in: Uncategorized. Tagged: worthersee tour 2011. Leave a comment

Ah man, where to start! I get so excited every year this show happens. I can honestly say that this is probably the biggest car show week/weekend. It is held is Austria every year around this time and it NEVER fails to deliver on a staggering amount of attendance and cars. I know I always praise H2O for being the best show of the year, but Worthersee has it beat. In H2O we take over a strip along the water, but with Worthersee the car enthusiasts take over an entire town. In its 30th year running it will offically start on wednesday, although people have been there since last tuesday!!! Plain crazy!

I was planing posting up a couple pictures of my favorite cars so far, but since I have about 200 pictures from a show that hasn’t even “officially” started I’ll give you a sneak peek with these video found.

Seriously, this is the best video ever! Really nice MK4 R32 on air. The car is his baby. I think we can all relate when something like ice cream is spilled in your baby. No matter how pretty a girl you have a passenger seat. HAHA.

I felt his pain!

I wouldn’t normally post something like this. But for some reason this Harley really caught my eye. It’s very, very different to say the least. What catches my eye is the fact that it is ALL red. I mean, take a second to look at it. Everything from the front forks, hand grips, even the kick stand! I just has a ultra modern, ultra clean look to it that is undeniable. Must hurt like crap with out a seat though!

I have to say, I would go as far as rocking the red sunglasses, shirt and sneakers, but I do just credit where credit is due.

Highly modified aircooled beetles have been around for ages. But for many reasons, you rarely, if at all see these Porsche 356 so highly modified. I have to say, this flat grey example slammed on it’s balls makes me want one BAD! btw, The green Bus in the background is nuts too!

Ok, I understand that Ford is making huge steps forward in it’s industry. I think we can all say that their car’s quality and looks have improved dramatically is the last 2 years. But I have one question. WHYYYYYYYYY didn’t you bring the Focus RS to the states!?!?!?!?!?!?!?!??! The European RS is easily the best looking(and probably performing) Ford I ever seen. People would literally line up to buy that hatch. I mean c’mon!!!

The pictures I found below prove my point even more. I mean just look at that machine! 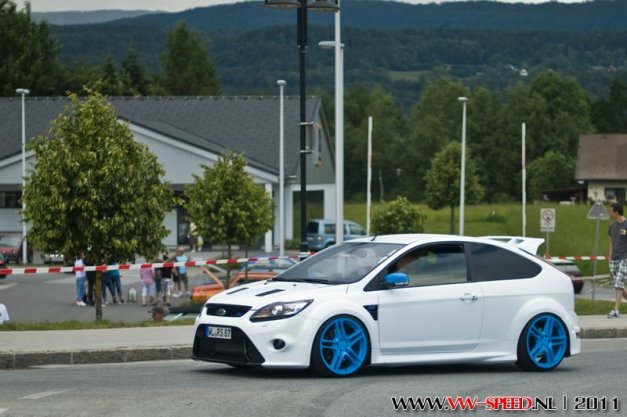 btw, this car is out for the Worthersee tour. The show “offically” starts next thursday, but people have been out there since tuesday. Pretty crazy. I have to say this is one show I NEED to attend one year. I have about 100 pictures saved so far just from the past couple days of quality cars.

Another short video from Simply Clean. Having just came back from a Florida vacation, I was reminded with this video how jealous I am of the, smooth as glass, roads down there. A little MTV cribs style video with a super clean S4 on Rotiforms and an even cleaner MK2 sitting on schmidt wheels. I can not express how much I love the small bumpers on the MK2’s. I would rock this thing all day and night.

Posted by truedrivingdale on May 25, 2011
Posted in: Uncategorized. Tagged: southern worthersee 2011. Leave a comment

Southern Worthersee seems to be getting bigger and more popular every year. It is held in a town that looks like it should be in Germany. I would love to go one year. The only thing holding me back is the 15+ hour drive one way. Here is a great video covering the event. A lot of quality cars.

What a surprise this car show turned out to be! I really didn’t expect much of a turn out due to the weather and looking at last years coverage. But boy was I completely WRONG. Eurofest is a fairly new show in it’s junior year that is held every spring at Paul Miller BMW. I had the pleasure to park my car in the vender area with SNTRL which had exclusive coverage of the show. My good friend Kenny along with his partner Edwin did a great job getting great coverage of the show as well as running a superb enthusiast site. It’s going to be great working with them in the future.

On to the pics. Like I said, it was a hell of a show. A complete shocker to everyone.

Got there at about 11am.

Here is my GTI setup with the SNTRL booth. I’ll have a separate post on the car and it’s specs. 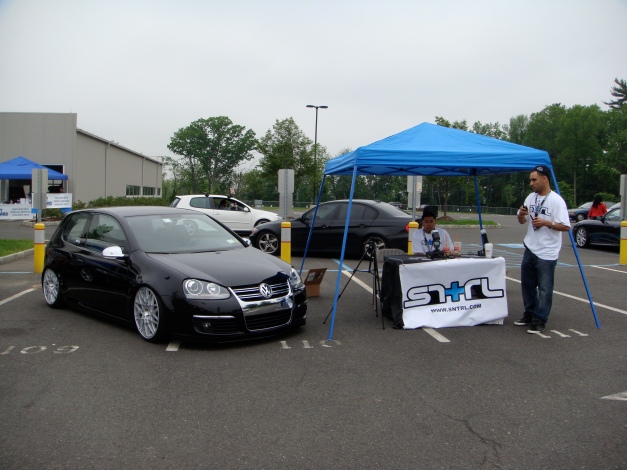 They must have changed the location of the table and SNTRL sign about 4 times. haha. Chris and Vic helping setup.

Next car in the SNTRL booth showed up. White E46 vert goodness sitting on BBS LM’s. So clean.

Here is Kenny, Mr. MadJDM putting the vert into position. MadJDM rocking a bimmer? What you guys think? lol

Ken applying the SNTRL sticker to the E46. I forgot to tell him. That is where he should have every SNTRL sticker on every car. A trademark kind of thing. Just a thought. 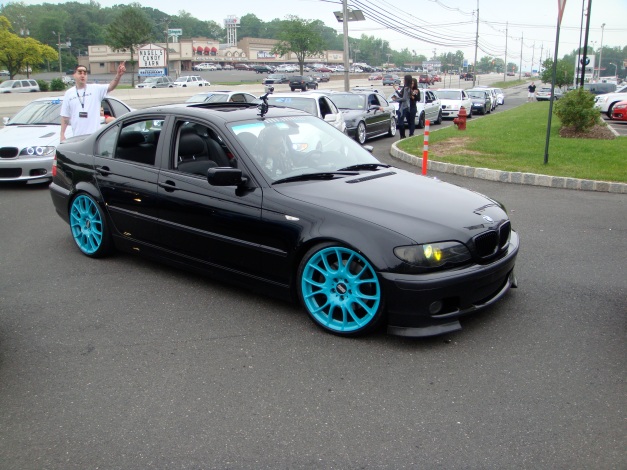 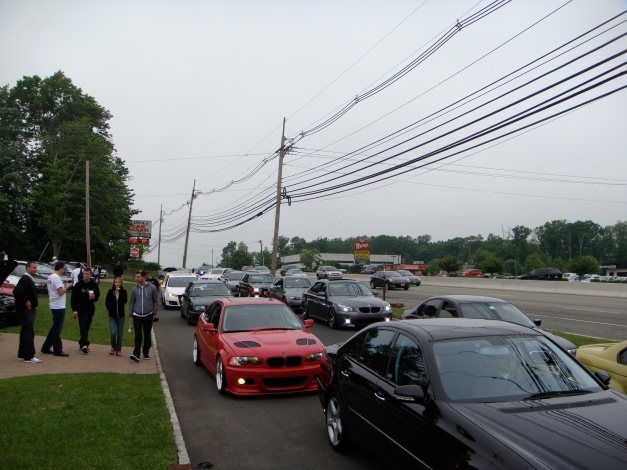 As you can see, this is when cars started rolling in. And as you can, see the line is really long. 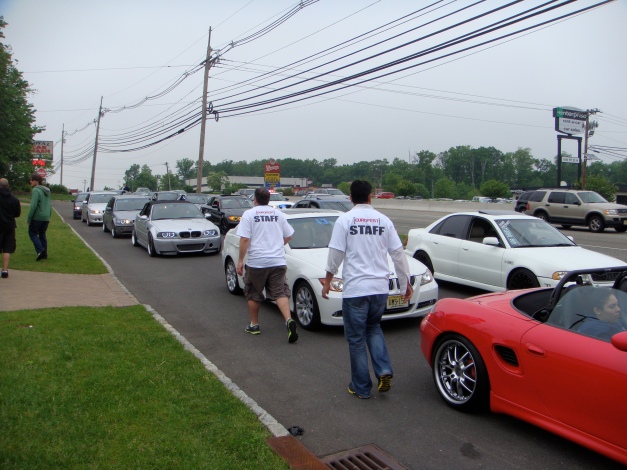 The line got so long in fact, the cops came to tell the organizers that they had to close the entrance. Thankfully, after a little freaking out, they got most of the cars in. 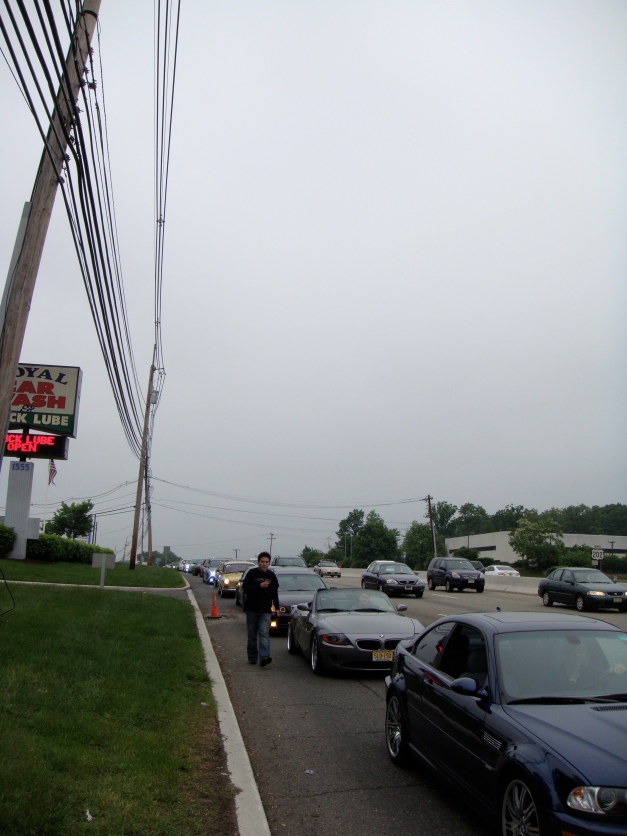 Here is the line OUTSIDE of access road to get to the dealership. One dude told me it wen’t a mile back. Crazy. 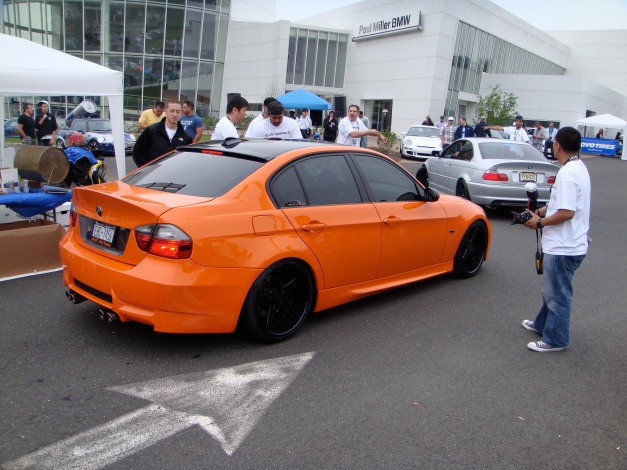 Sweet M3 rolling in and Chris paying no attention to it. He was probably looking for the next guy to take a picture of. HA! 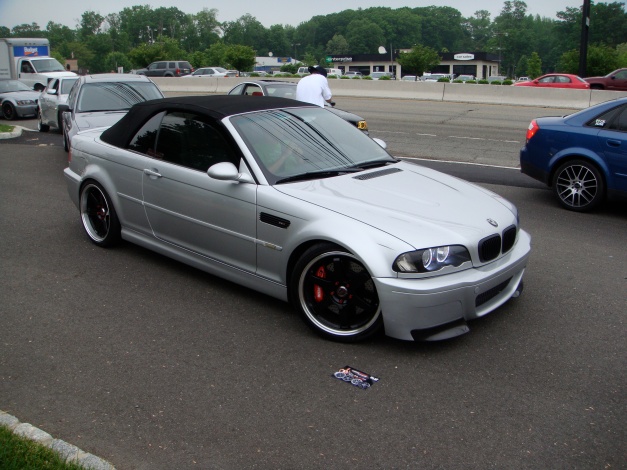 Nice E46 vert sitting on Volk TE37’s. Sounded like it was supercharged too. Vic in the background putting work in with the camera. 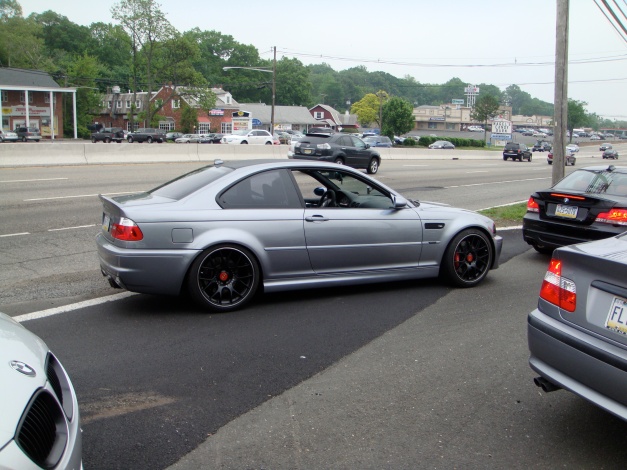 This M3 was modded nicely siting on BBS CH’s.

Here is one of the few Volkswagen’s that showed up. I gotta say it was a EURO show! Gotta bring out the dubs to represent! I guess everyone was at Southern Worthersee. 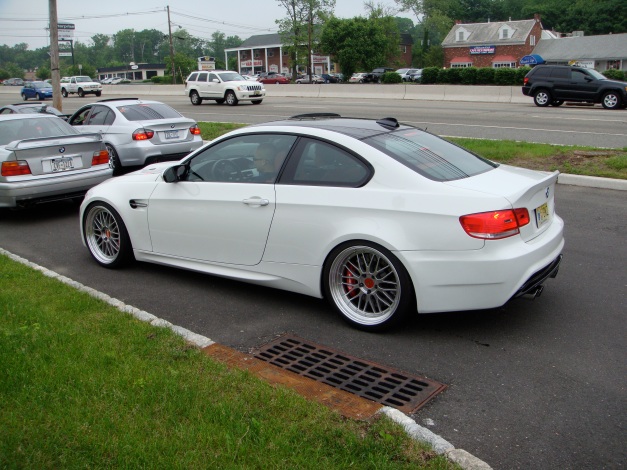 Talked to this guy for a couple minutes about my airride setup, but our conversation was interrupted by some kids who thought I should put LED’s in the front bumper, SMH. Really cool dude though. In my opinion, he had the nicest E92 out. Clean drop on BBS LM’s and Amuse Ericsson trunk and rear bumper. If you read this, hit me up. 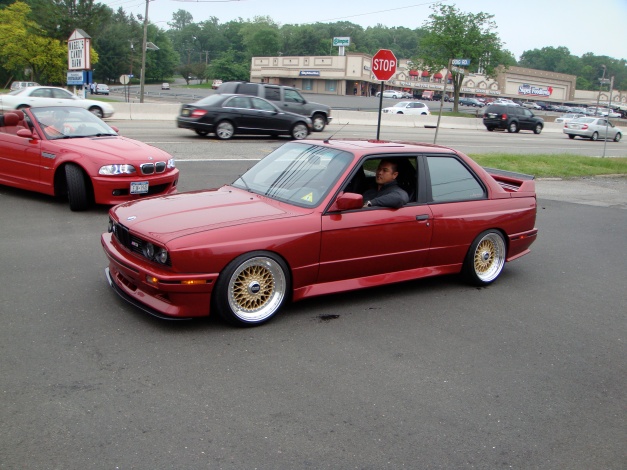 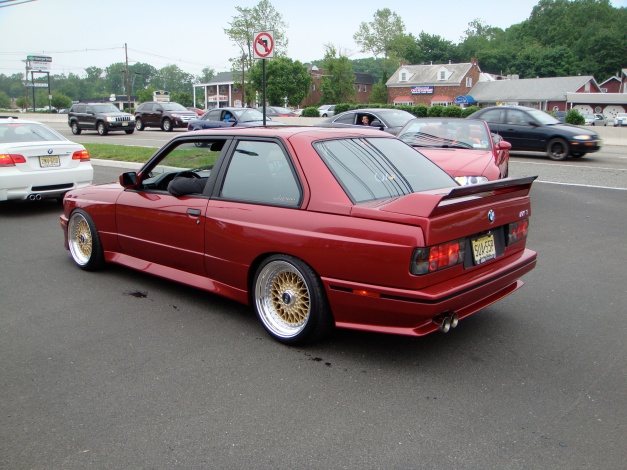 This is when I started making my way back into the show area. 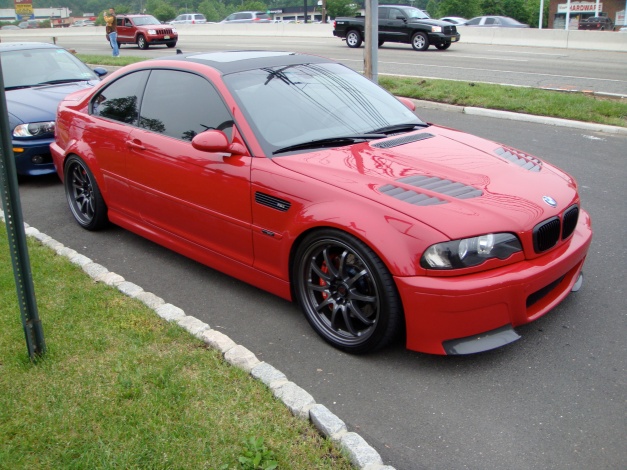 There were so many cars that people were parking where ever there was space open. 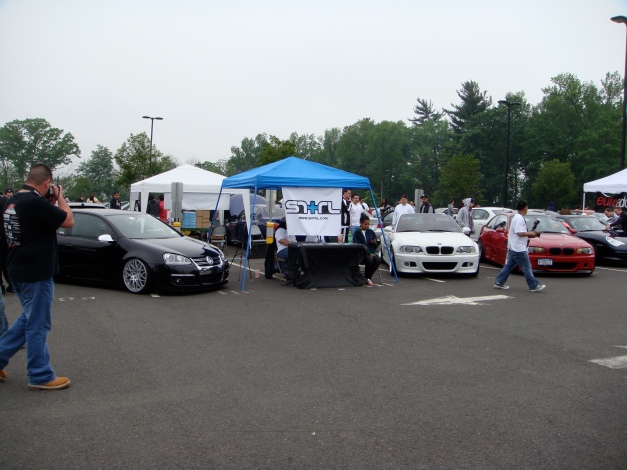 Another E46 M3 showed up for the SNTRL booth. I LOVED this car. 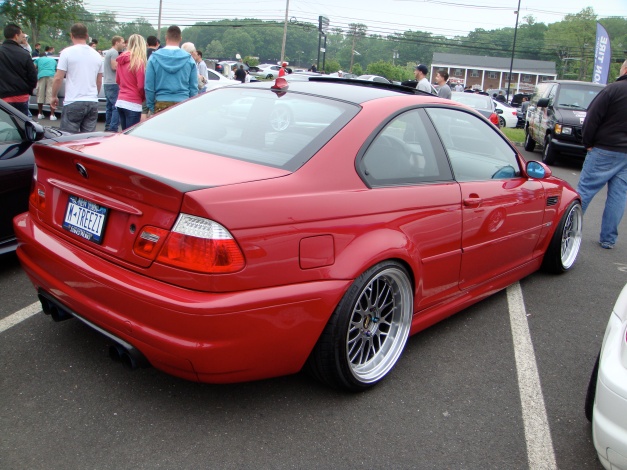 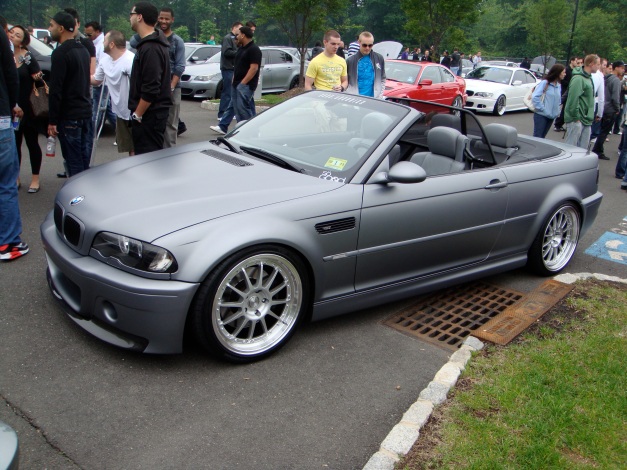 The paint on the car was Amazing. It’s called Frozen Grey and is found on the new special edition M3. Its almost a flat grey but with a hint of metallic. So sick. 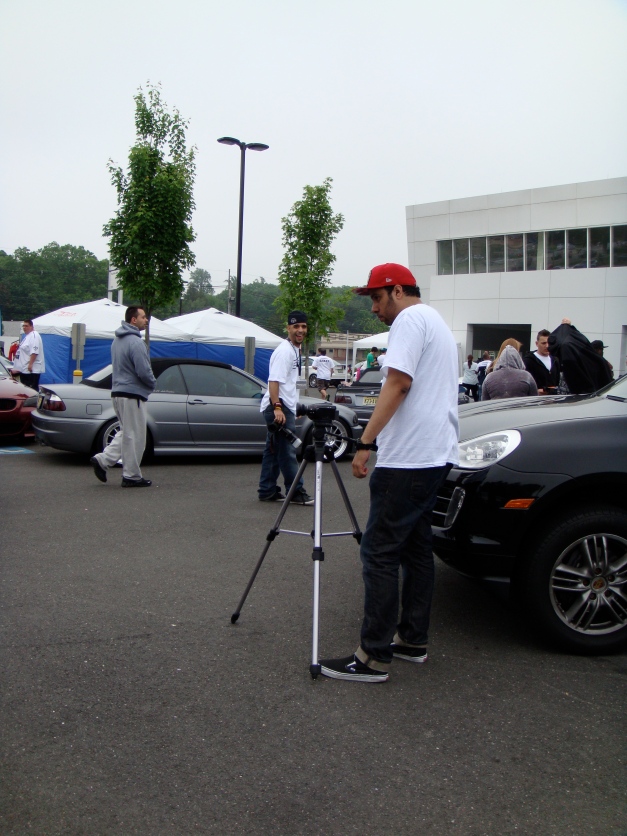 Edwin working hard, while Vic was hardly working haha. All jokes aside though, these guys did a lot of running around to get good coverage. 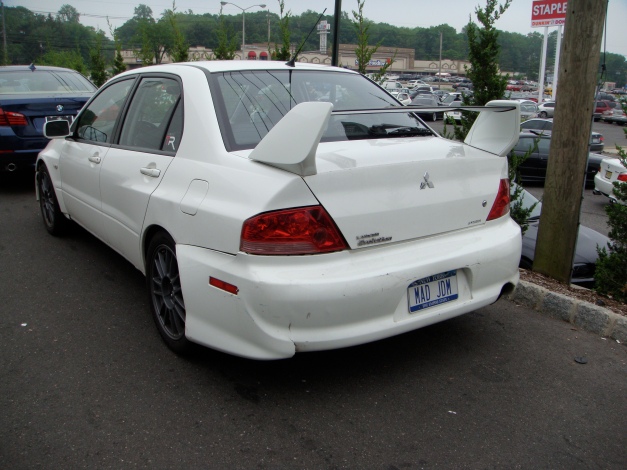 Lets just take a moment here and see how F’ed up Ken’s car looks!…….ok moving on.

Always had a soft spot for these RS6’s. 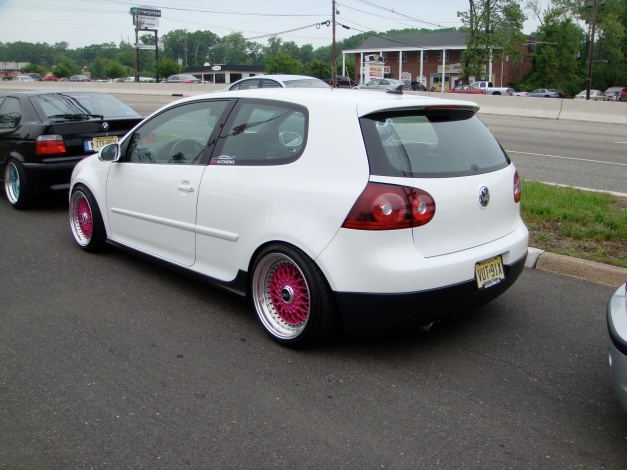 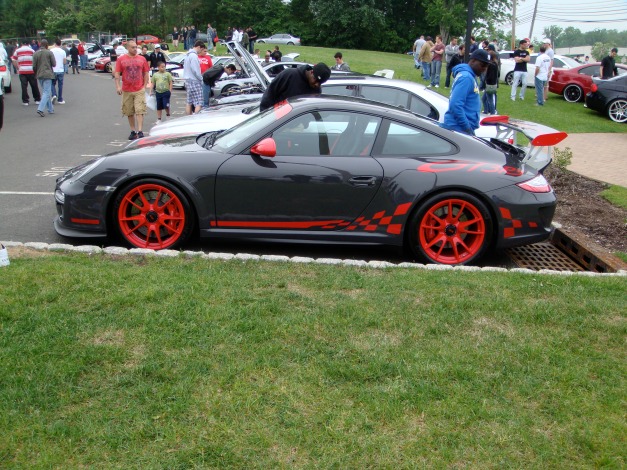 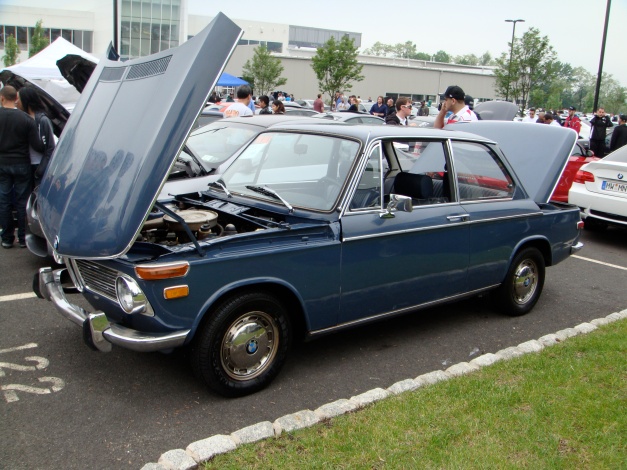 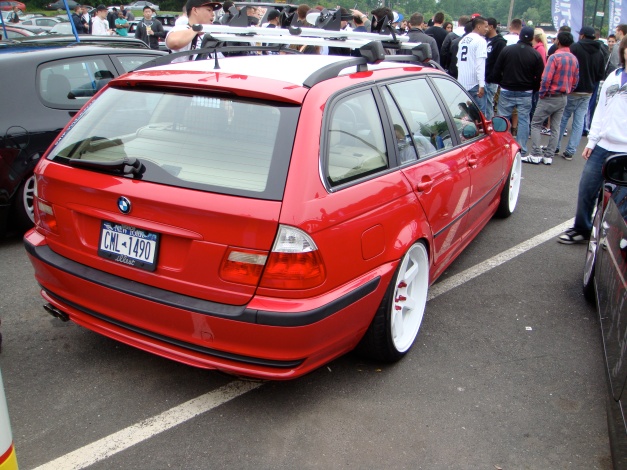 Around 3 Charles showed up with his stanced out wagon sitting on Varrstoen’s. Always a pleasure chatting with him. 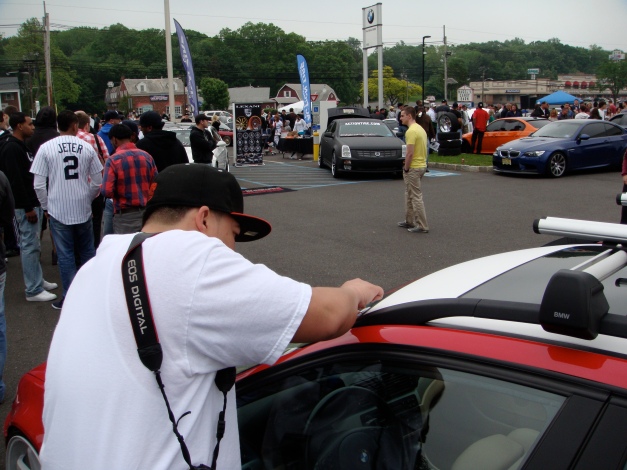 Kenny was the sticker man of the day. 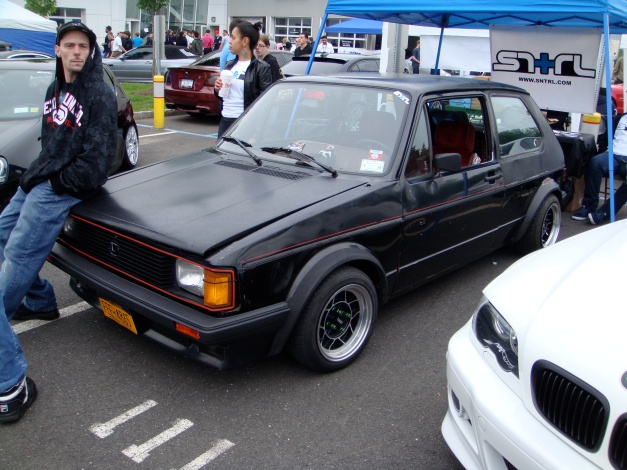 Just before that JP bought his Rabbit out to the show. Kind of mad this was the only shot I got of the car. Oh boy, does this car have something special planned for it.

So this was the SNTRL booth from front to back. Wanted to get a better shot, but the place was so damn crowded!

A couple JDM car showed up. This TSX wagon is um…we’ll lets just say I won’t do the horror is showing the back of it. Its a pretty ugly car. Nice job on wheels though. 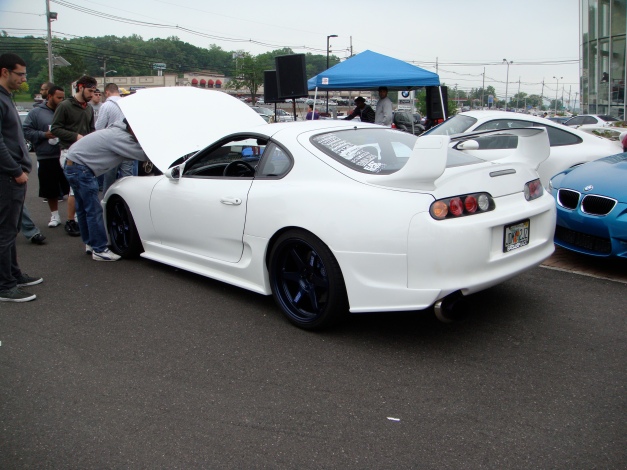 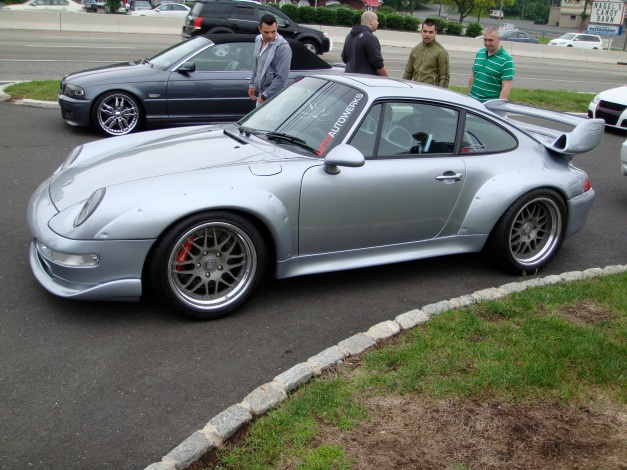 Easily the nicest E36 of the show. The stance was spot on.

Being creative with his stretched tires. 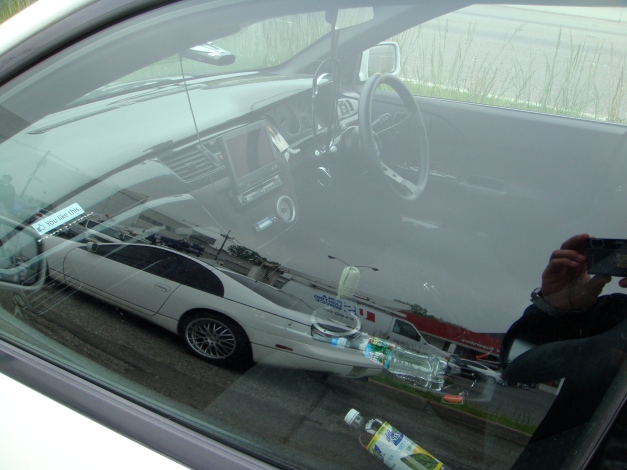 Offical JDM RHD Evo. Pretty nuts. I was mad because there were some nice 350’s and a SICK NSX with this Evo that I took pictures of with Ken’s camera but totally forgot to use my own. lol

That about does my coverage. The show was really a shocker, especially on the turnout. Shout out to SNTRL and all who helped that day. It was a pretty long, exhausting day.
I will leave you with some craziness someone decided to do while leaving.

Check out SNTRL for full coverage of the show. Should be up in a bit.

I decided that my next show car is probably going to be an S2000. Even though, after all the positive comment I got at today’s show, I might keep the GTI a little longer. The video below show’s one of the hottest S2k’s out right now, in my opinion. Stanced out on some lovely CCW’s. Crazy.

Posted by truedrivingdale on May 19, 2011
Posted in: Uncategorized. Tagged: wagenwerks. Leave a comment

Wagenwerks to me, puts the best productions together. To put it simply, they just have the eye when it comes to automotive videography. The video below is a teaser of what is to come and I seriously can not wait.